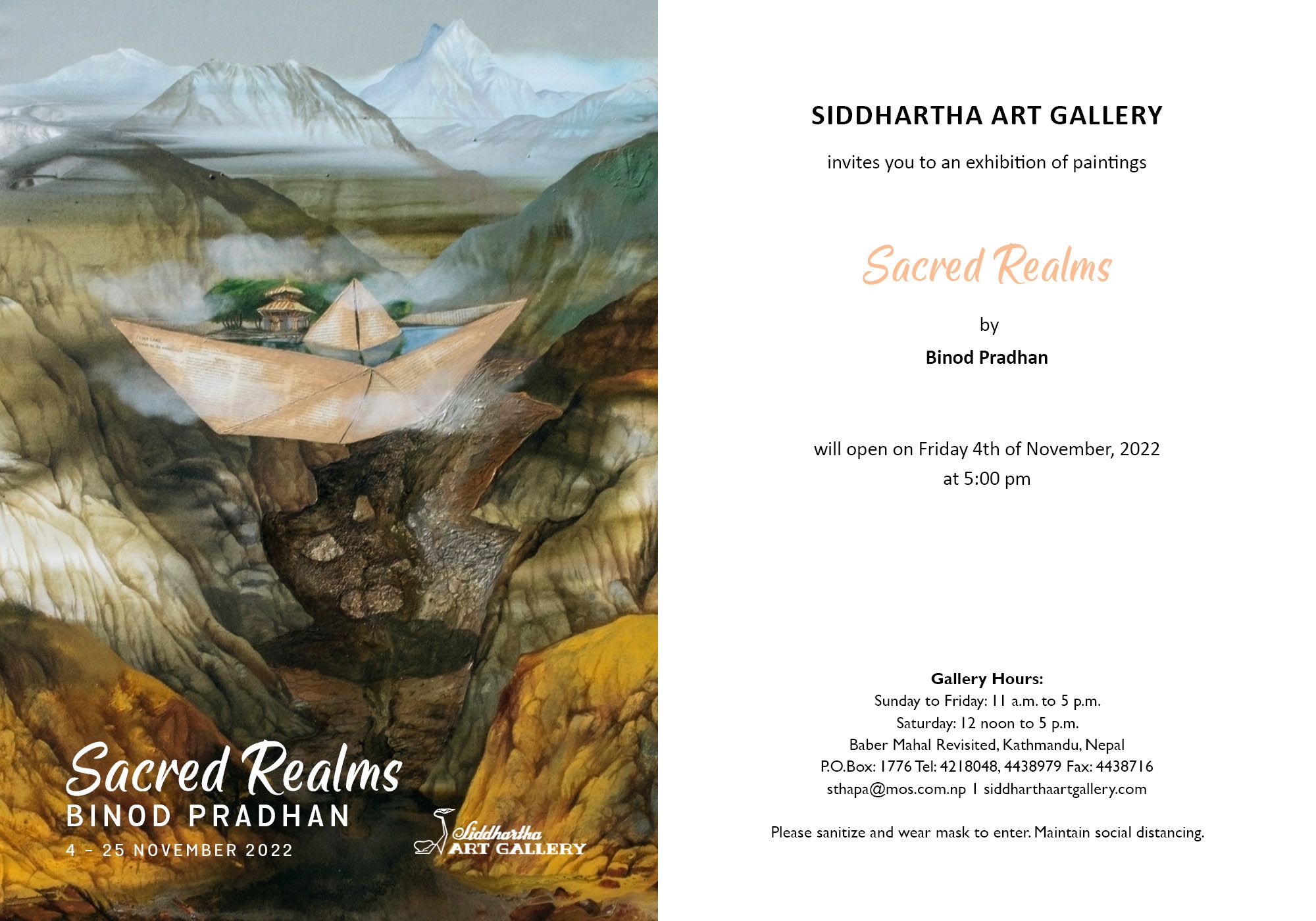 WHAT: Sacred Realms by Binod Pradhan

Binod Pradhan’s exhibition Sacred Realms marks the artist’s fourth solo exhibition at the Siddhartha Art Gallery. Nepal’s landscapes, her cityscapes, culture, and its fragility have always been the locus of the artist’s work.

His third sole exhibition Collision in 2012 was a definite departure from the local cityscapes and religious monuments that we saw in his exhibition Sacred Spaces in 2009 and in his earlier work in 2006. The collision of human greed and nature was the subject of Binod's paintings in 2012. For the artist, climate change and global warming are viewed as part and parcel of this collision. Nepal is listed as one of the most vulnerable countries that will be impacted by climate change.

However, his work did not drift far from Hindu Buddhist philosophy which propagates the idea of a kaliyug where human greed leads to wars and the annihilation of the world as we know it.

As a concerned global citizen, the artist composed landscapes of doom from his imaginaire. An incandescent palette captured a world at an apocalyptic precipice: rivers of glacial ice swallow up settlements, the sea is overturned, aquatic life is terminated, forests are plundered, and human greed renders the air noxious. Ever the divine hand, a repeated image in his works, is stunted. And yet somehow the prophetic scenarios and blighted conditions failed to be threatening due to the heady play of colors.

His last solo exhibition in 2016 marked a departure from his colorful palette. Instead, the works in this series were markedly different - black, sienna, and yellow ochre, and its variations were used to create a mediative series of works that celebrated the artist’s rendering of imaginary landscapes inspired by the barren rocky landscape of Mustang, the lush mountains from the mid-hills and the snowcapped mountains in the North. In each of these terrains, the artist paid homage to the enduring icons of spirituality—a stupa, a chorten, or a temple.

This exhibition Sacred Realms continues to focus be Nepal’s sacred geography - the landscape, architecture, and culture. The artist’s quest to portray the mythical beyuls or sacred hidden valleys, that is said to protect the faithful in times of crisis can be seen in this series of work. According to the belief of the Nyingma school of Tibetan Buddhism, beyuls are hidden valleys often encompassing hundreds of square meters of land which Guru Padmasambhava blessed as refuges— are said to be found in the Himalayan regions of Nepal Tibet, Sikkim, Bhutan, and India.

This quest to depict the beyul is an exuberant one – as can be seen in the artist’s choice of palette. Binod’s unpeopled landscapes are once again infused with color to portray the magical or mythical dimension of these sacred realms. No mortal can live in this dimension. Once again a pair of divine hands can be seen – these hands not only protect the beyul but have the power to lead the faithful to these haloed sites. Temples and stupas sit atop a craggy tall mountain that looks impossible to reach, while huge boulders, waterfalls, shimmering lakes, and mists shroud the beyul from the wayfarer. In the painting Realm of Meditation, a lone figure sits atop a craggy mountaintop – is it Guru Padmasambhava whose tantric powers included the power of flight? In his painting Reflection of Realms a lone traditional Lakhe dancer dances in front of a city bathed in a shimmering golden light – was Kathmandu Valley the ultimate beyul that Manjushri reached and cut the gorge so it could be peopled?

Binod’s exhibition Sacred Realms is a celebration of the divine and mystical aspect of the Himalayan region.

Binod Pradhan is a name familiar in contemporary Nepali art. He is an artist with definite convictions – he paints what he believes in. His forms are expressive and his choice of colors reveals his sense of judgment to match the desired theme. A unique part of his style is his cool and pleasant application of colors and the linear emphasis of the forms.

Pradhan is a sensitive artist, who has focused on the precariousness of our environment and global warming. As a response to the impact of climate change, he has created eco-paintings that serve as an appeal to preserve the environment and ecosystem. He also experiments by making collages of images on canvas. His application of colors creates a unique surface of fine texture. He attempts to deconstruct the binary oppositions about art and reality, as he integrates real things into an artwork. His landscapes are bold in their impact due to the energetic sweeps of colors that he uses to paint landscapes that are vanishing; his works suggest a sort of nostalgia. His recent series of work and the very idea of shifting the location of the temples to the Himalayan region is a beautifully worked out and imaginative project. It also evokes an irony and a call for the protection of the cultural heritage realms represented by these precious structures and arts.

Binod holds Bachelor’s degree in Fine Arts from Fine Art College, Kathmandu, Nepal. He is the co-founder of Kasthamandap Artists Group and the online art gallery E-Arts Nepal. He has had ten solo painting exhibitions nationally and internationally in South Korea where he has held two men's exhibitions twice. 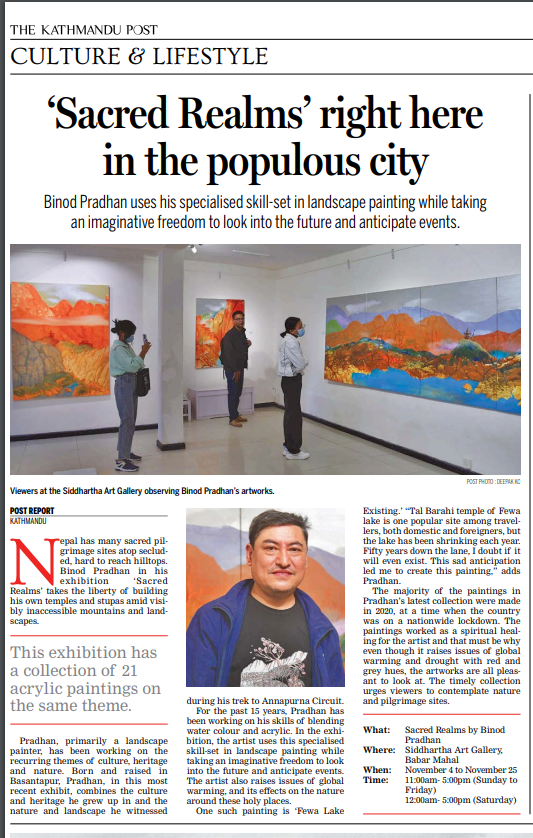 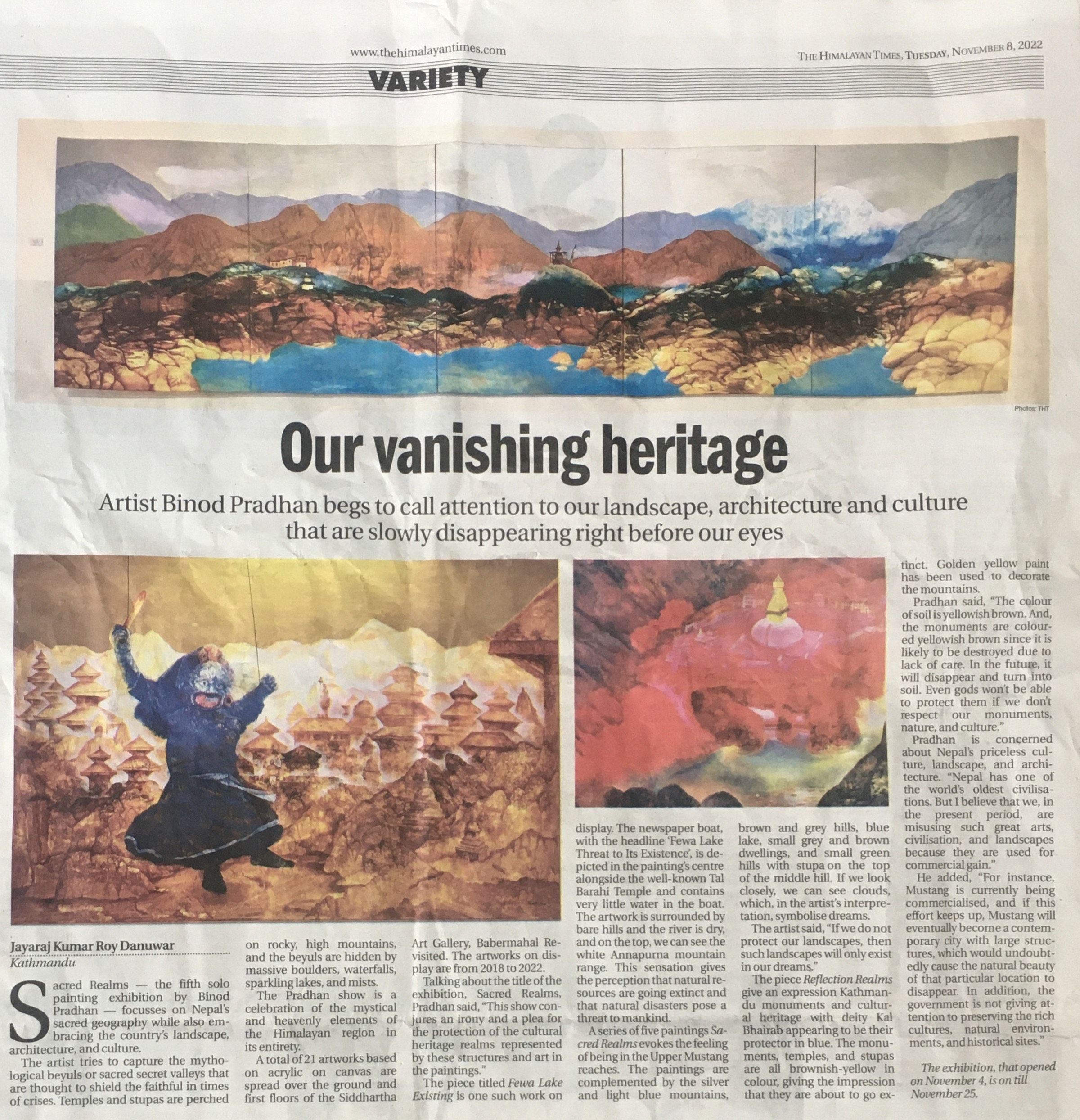